Both singers impressed with their elaborate halftime performance. 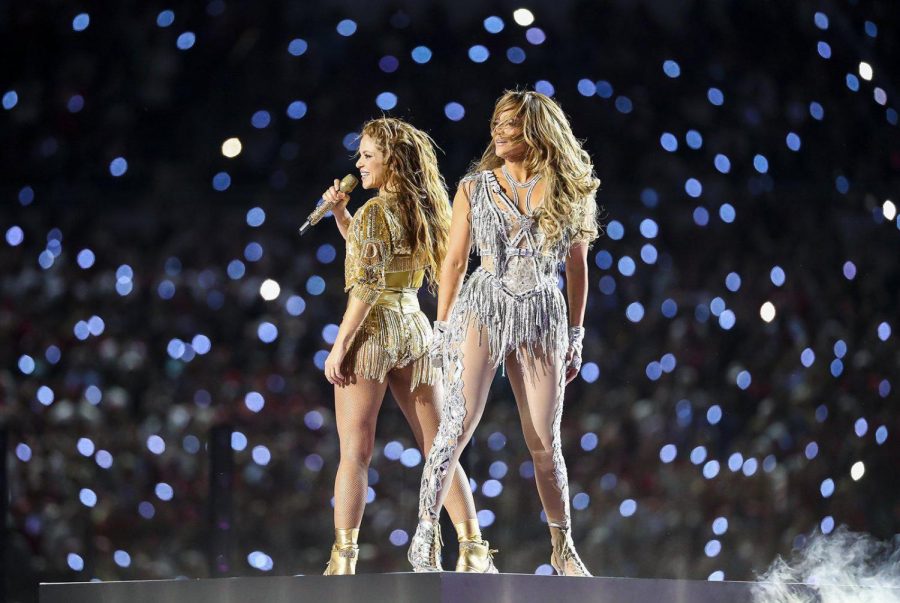 Music sensations Shakira and Jennifer Lopez did not disappoint in this year’s Super Bowl LIV halftime in Miami, Florida Sunday, Feb. 2. Both singers dressed to impress with stunning outfits and multiple costume changes as they represented and highlighted the vibrant Latino community within Miami.  In the entertaining evening, the Kansas City Chiefs won 31-20 to the San Francisco 49ers.

The halftime show opened with Shakira in a beautiful red two-piece as she and her backup dancers performed a very well choreographed, Shakiraesque dance routine with lots of hips and complicated moves. She then breaks out the guitar during “Empire,” which is the climax of the excitement throughout the stadium and the surrounding stage. Increasing the Latin focus of the show, rapper Bad Bunny joined Shakira to perform his and Cardi B’s No. 1 Billboard charting hit “I Like It.”Shakira saved fan-favorite, “Hips Don’t Lie” for the end of her solo performance, crowd-surfing as the audience sang along.

Joining Columbian singer Shakira on stage, J.Lo made a stunning entrance in a cool black leather outfit that was revealed when she ripped her long hot pink skirt off. She started her set with “Jenny From the Block,” which was a great, classic song instilling early 2000’s nostalgia. She and her dancers’ choreography was flawless and included impressive moves like utilizing a cane as a prop and very difficult-looking pole-dancing. One of the best songs was “Mi Gente” with rapper J.Balvin making a guest appearance. Following “Mi Gente,” the show transitioned to “On the Floor.” The entire stadium erupted in spirit. The energy was unmatched in comparison to last year’s underwhelming performance by Maroon 5.

J.Lo’s daughter, Emme Maribel Muñiz, and a choir of other children surprised everyone with a guest performance. As Muñiz performed J.Lo’s “Let’s Get Loud” and a little bit of Bruce Springsteen’s “Born in the U.S.A,” J.Lo put on a beautiful feathered cape that had the U.S. flag on the outside and the Puerto Rican flag revealed from underneath. Since both Shakira and Lopez are Latina icons, Latino culture was embraced throughout the entirety of the show. This representation was fitting for the Super Bowl’s presence in Miami as 64.7 percent of Miami’s population is Hispanic.

Watching both singers’ elaborate dancing, pole-dancing and hip-shaking while singing along and simultaneously smiling was what made their performance so great. As Super Bowl LIV concluded with a big win for the Kansas City Chiefs, the halftime performance served as the cherry on top for a groundbreaking night. Shakira and J.Lo deserve much credit for their performance because that is certainly no easy task—and they both looked fabulous while doing it.