Best Performances from “One World: Together at Home”

Hosted By Lady Gaga, here are five of the top acts from the "One World: Together at Home" concert featuring an array of musicians. 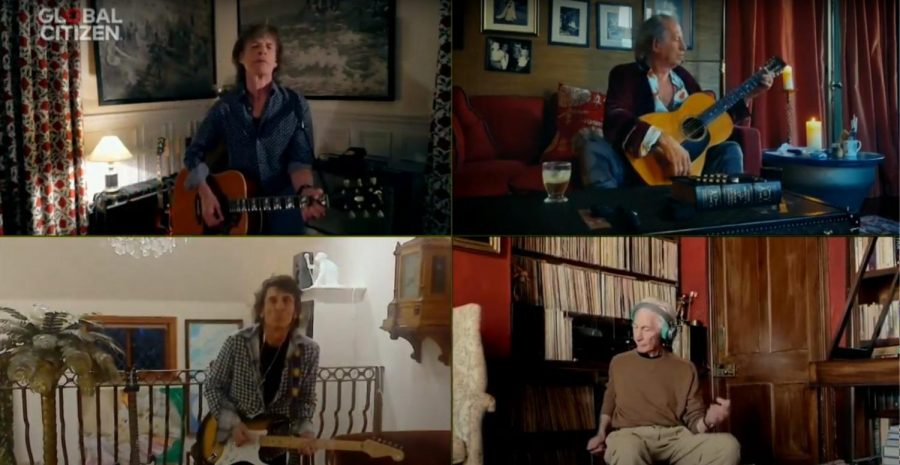 Performing “You Can’t Always Get What You Want,” The Rolling Stones participated in the One World: Together At Home telecast April 18.

Partnered with the World Health Organization and Global Citizen, “The One World: Together at Home” concert aired globally April 18 in tribute to medical care workers working the front lines during the COVID-19 crisis. The concert highlighted multiple artists, including classic artists like Billy Joel and the Rolling Stones, as well as current artists like Lizzo and Billie Eilish, each performing from their own homes. Since some missed the concert, here are five of the best performances from the telecast.

1. The Rolling Stones, “You Can’t Always Get What You Want”

In this at-home rendition of “You Can’t Always Get What You Want,” each member was videoed separately and combined onto one screen. This lively act features Mick Jagger, Kieth Richards and Ronnie Wood on guitar and Charlie Watts, who used hard suitcases as a make-shift drum set. Though lengthy at five minutes and 37 seconds, this classic is definitely worth the watch.

Accompanied by her brother Finneas on the piano, 18-year-old singer Billie Eilish sang “Sunny” by Bob Hebb. Eilish’s soft, yet rich voice was highlighted with her brother’s soothing piano playing, all tying into a beautiful performance only two minutes and 36 seconds.

John Legend and Sam Smith dueted virtually for their version of “Stand By Me’ by Ben E. King. With Legend on piano and singing soulfully, Smith sang in his own home with a powerful, belting voice that gives anyone chills.

4. Shawn Mendes and Camila Cabello, “What a Wonderful World”

A couple since the summer of 2019, Camila Cabello and Shawn Mendes performed their version of “What a Wonderful World” by Louis Armstrong. While Mendes played piano and began the song, Cabello joined in, creating a soothing, yet powerful harmony. The song has a sincere message behind it, inspiring viewers to be grateful for what they have, despite the crisis at hand.

In this compilation of English singers Lady Gaga, John Legend and Céline Dion, Italian singer Andrea Bocelli, and Chinese pianist Lang Lang, the rich, strong voices and heavenly piano combine to form a melody sure to bring tears to viewers’ eyes. By far the best performance of the show, these artists harmonized to create a blend of male and female voices, high and low, but all equally powerful. The moving praise song incorporates English and Italian lyrics, representing the bond of people all around the world to come together amongst the time when we need it the most.