Presided by Father Sunoj Thomas, students and faculty participated in the Respect All Life Mass held Oct. 10 in dedication of the Catholic Church's pro-life beliefs. 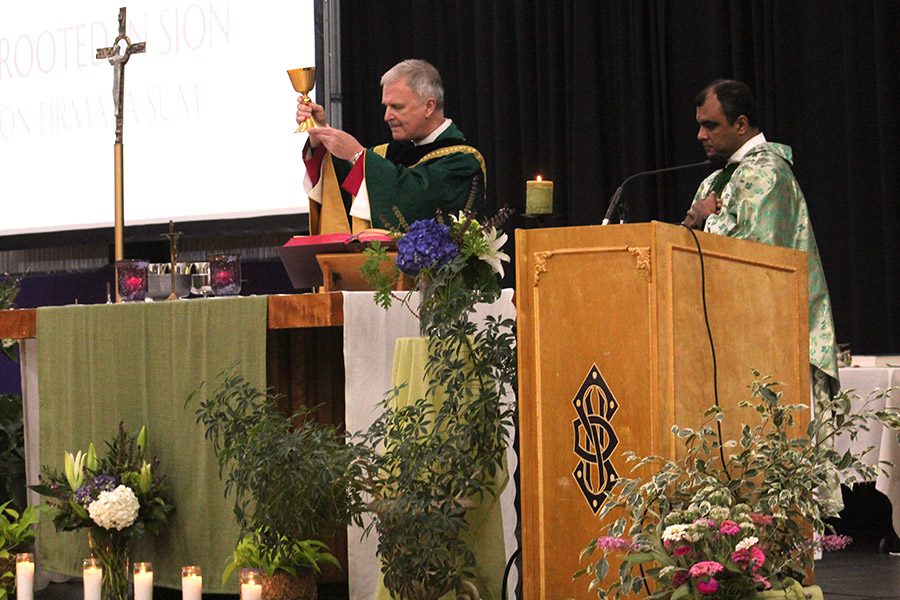 `Students and faculty gathered in the gym for the “Respect All Life” Mass Oct. 10. The Catholic Church dedicates October as a month for a call for action to respect life.

The Eucharistic celebration was in order to encourage all people to have a voice for those who do not have a voice or those who are unable to speak their voice, according to Director of Campus Ministry Stephanie Pino-Dressman.

“During October, we draw to mind, prayer and action, respect for all life, support for the poor and vulnerable and care for all creation,” Pino-Dressman said. “As a Sion school, we are committed to building a world of peace, justice and love.”

Grand Choeur began the Mass with their rendition of “Creation,” composed by Stephen Hatfield. Pino-Dressman addressed the crowd before mass with a speech summarizing the theme of the mass and reflecting on the Catholic Church’s stance on respecting all life. Father Sunoj Thomas, pastor at St. Catherine of Sienna, was the presider for the mass. Junior Olivia Overlease was one of many students able to reflect on their views in regards to the theme of respecting life, as she gave the first reading.

“My family has always been pro-life and this past year I’ve become more involved with that effort,” Overlease said. “When the club leaders asked us to be a part of the mass I felt strongly inclined to participate, so I read the first reading.”

The Mass was followed by a speech from Alive for All Life club president sophomore Lydia Poe. Her speech explained all of the events that the club would be hosting throughout the month of October including a guest speaker and informational meeting on the 2020 March for Life trip.

“The Respect All Life Mass brings a voice to the voiceless,” Poe said. “By bringing attention to those who cannot speak for themselves, we are giving them a voice and the ability to speak out.”