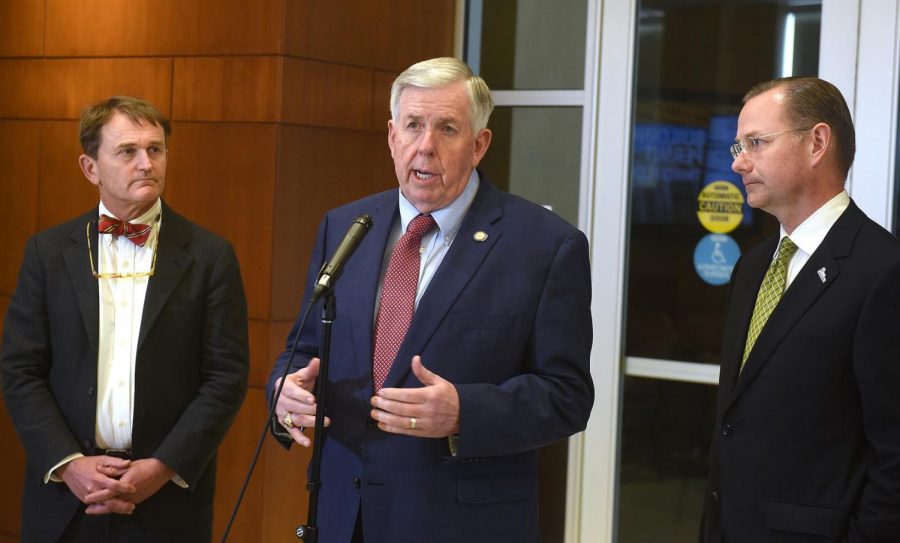 Gov. Mike Parson, center, Missouri health director Randall Williams, left, and Mayor Brian Treece talk to the media during a press conference at City Hall in early March on the state's strategy for the coronavirus.

In an effort to prevent the spread of the coronavirus, Missouri governor Mike Parson imposed a statewide stay-at-home order from April 6 to April 24.

The first case of coronavirus, also dubbed COVID-19, in Missouri occurred March 7 in St. Louis county. Since then cases have risen to 2,722 cases along with 39 deaths. Following along with the recommendations from President Donald Trump and the Centers for Disease Control and Prevention, the order mandates for residents to stay at home unless absolutely necessary to leave. Necessary activities are deemed as “essential” and outlined in-depth through the order. Individuals must “avoid social gatherings of more than 10 people,” according to a press release from Parson’s speech to the state.

“I have been social distancing by staying home,” junior Hannah Borgmeyer said, “unless I have to go to the grocery store.”

Compared to Kansas, Missouri could be considered as taking action late. Prior to the statewide stay-at-home order, Missouri was one of the last states without any COVID-19 state regulated social distancing. Governor Laura Kelly of Kansas took a more abrupt stance against COVID-19 in being the first state to order K-12 public schools to close for the rest of the year. Kelly also stated that the majority of 18,000 state workers would be required to stay home for two weeks before returning to work.

“I think he should have made the announcement earlier because he left it up to the counties to decide, but it is an issue that should be addressed at the state level,” junior Lia Concannon said. “Missouri was one of the last states to issue one.”

Parson ultimately left it up to the school districts to decide the fate of the remainder of their school years. Defending his decision, Parson said in a briefing that rural areas in Missouri depend heavily on public schools and childcare services for employment, according to the Springfield News Leader. As of March 21, the day of Kansas City’s stay-at-home order announcement, all of the 14 Kansas City metropolitan school districts agreed to the closure of in-person classes until April 24. High school president Alicia Kotarba extended the April 6 end date of online-classes to April 24.

“I think that Missouri and Governor Parson have taken enough precautions,” junior Anna Donnelly said. “I feel that if they were to take any more precautions it could cause even more panic and result in more issues and next thing you know stores are out of more than just toilet paper.”

As COVID-19 continues to progress, the governor will continue with his daily press briefings. Parson will review the stay-at-home order before the expiration on April 24 to decide whether it needs to be lifted or extended.