Local activists participated in a protest regarding police brutality against black Americans at the Country Club Plaza on May 30 and May 31. 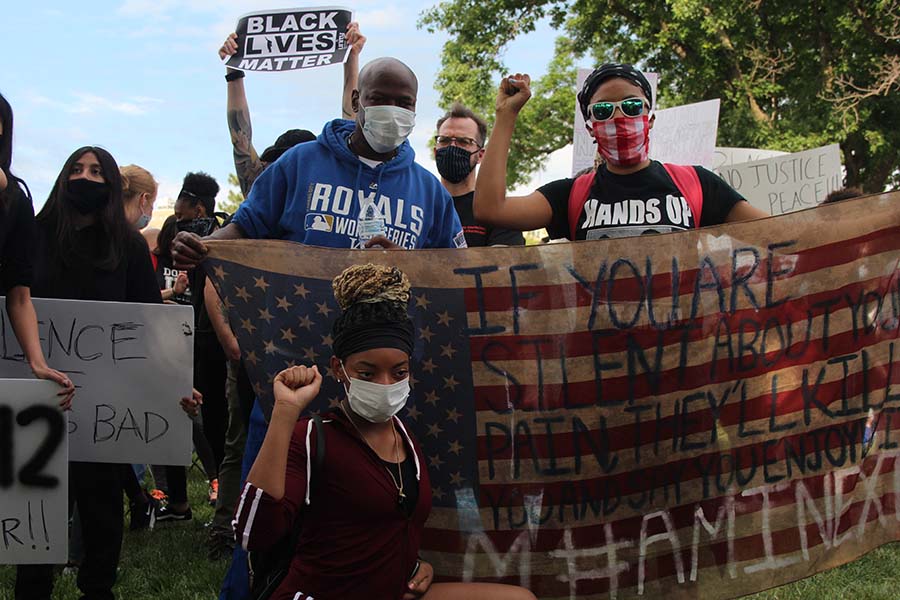 Three protesters hold an American flag being used as a protest sign and raise fists during the Black Lives Matter demonstration at the J.C. Nichols Memorial Fountain on May 30. A raised fist is a symbol commonly used to represent solidarity among oppressed peoples.

Protesters lined the streets of downtown Kansas City, Missouri to stand against police brutality against black people in the United States on May 30 and May 31. The protests, taking place in cities across the country, were a response to the murders of George Floyd in Minneapolis and Breonna Taylor in Louisville, both unarmed black people killed by the police.

“I went to the protests because as someone that holds not only intersectional identities, I also hold privilege from being white. This privilege allows me to not be affected by the systemic oppression of people of color and black Americans in the United States across a variety of institutions,” Kaitlin Jones, Class of ‘19 said. “I care about this, like everyone should, because it affects people close to me and communities across the nation. I’m not going to let them fight alone.”

Held in the Country Club Plaza area in front of the J. C. Nichols Memorial Fountain, activists and local allies rallied for a majority of the weekend. Although the protests were sparked by the murders of Floyd and Taylor, many attendees were motivated to fight for justice for other black Americans killed by police officers and to fight for racial equality as a whole, according to junior Annabelle Miller.

“Black people shouldn’t have to be inhumanely killed in order for change to happen or for people to suddenly care,” Miller said. “We can’t push this issue aside when it’s convenient. It must constantly be at the forefront in order to make lasting change.”

Protesters were advocating for a number of different causes regarding recent incidents of police brutality. Many called for a higher murder charge against former Minneapolis police officer responsible for Floyd’s murder Derek Chauvin, who faces a second-degree manslaughter charge and a third-degree murder charge, according to the official Hennepin County criminal complaint. Others wanted Taylor’s alleged murderers, Louisville Metro Police Department Sgt. Jonathan Mattingly and Officers Brett Hankinson and Myles Cosgrove, to be arrested. The men are currently on administrative reassignment pending an investigation.

“I went to the protest in order to speak up against the injustice that has been building up in this country through the killing of George Floyd, Michael Brown, Philando Castile, Ahmaud Arbery and countless others,” Miller said. “Black men, women and children shouldn’t be killed, racially profiled or discriminated against solely because of the color of their skin.”

The protesters were accompanied by a heavy police presence to the dismay of many activists, according to Jones. Many felt that the protest that mainly focused on de-escalating police presence in communities and stopping police brutality had too many officers in charge of keeping the peace and too harsh of peace-keeping tactics. The police used chemical weapons such as mace and tear gas as they saw fit in order to maintain order within the crowd.

However, some saw the humanity in the protesters and in the police. In some instances throughout the weekend, police officers and activists could be seen working together to de-escalate tense situations and sharing a common goal of ending police brutality, according to Miller.

“I watched as a black officer collapsed when he stepped away from the crowd in exhaustion. I watched as a woman expressed her anger and grief to an officer with tears streaming down her face,” Miller said. “What I found was peace, grief, happiness, solidarity, anger, empathy and unity.”

For many young people, these protests were an opportunity to get involved in activism that directly impacted their community. Because of the protests accessibility and the widespread national reaction to Floyd’s death, young people felt emboldened to speak out against injustice on social media, sign petitions and attend the demonstrations, according to sophomore Lauren Ellwanger.

“Although I wasn’t able to attend the protests themselves, seeing how many teenagers and people my age showed up to make a difference was so inspiring,” Ellwanger said. “The solidarity shown across social media and the support I saw for the protesters across all platforms made me hopeful that we can fight for a better future and make an impact on the world.”