Feminism is for Everyone

Despite the “fem” in feminism, it stands up for more than just women. 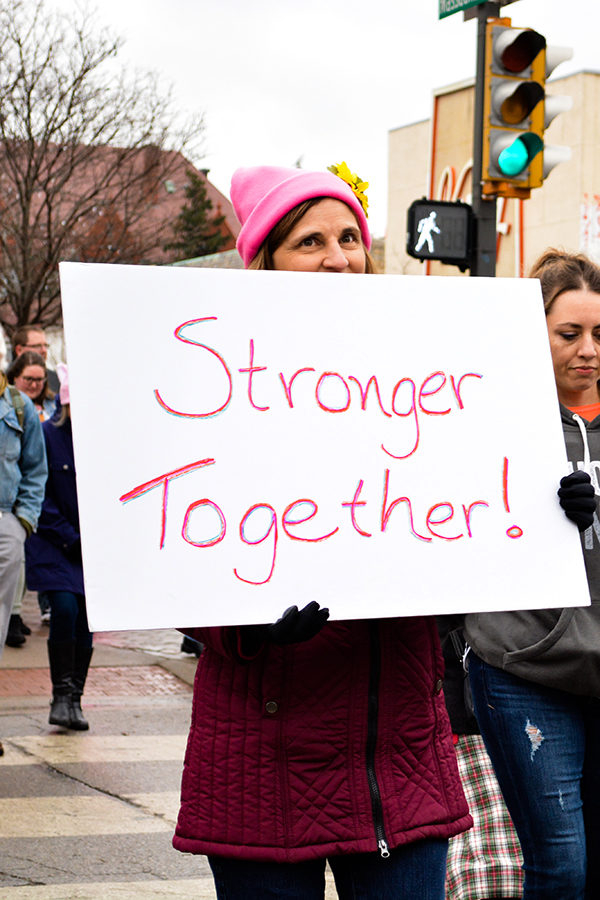 Walking down Massachusetts Street a women holds a sign in front of her at the Women’s March in Lawrence, Kansas Jan. 20, 2018.

Fewer than one in five women identify as feminists, according to polls in the United States and The United Kingdom by the Fawcett Society. This statistic may come as a surprise since, by definition, feminism advocated for women’s rights until the eventual goal of gender equity in every aspect of life from the workplace to marriage. With all the mistreatment and inequality women face including the pay gap, sexual and physical violence and child marriage, it’s a mystery why anyone would deny the feminist label.

For one, women aren’t paid equally for doing the same amount of work as their male counterparts. Hispanic women are paid only 54% of what white men are paid, Native American women 58%, black women 62%, white women 79% and Asian women 93%, according to the American Association of University Women. A major factor is that many high-paying jobs like engineering are overwhelmingly male. Only 13% of engineers are women, and those engineers, on average, make around 10% less than their male counterparts according to the Society of Women Engineers. Overall, women make 82% of what men are paid, according to the U.S. 2018 Census Bureau.

The economic gap between women is more than just an issue of being paid less. By paying women less and denying them entry into higher-paying jobs, according to polls by Gallup, countries forgo significant economic benefits. The National Gross Domestic Product of countries increases as more women are introduced to the workforce; 21% in Italy, 19% in Spain and 16% in Japan, with expected consistent increases, according to the Economist. The more women in the workforce, especially in higher paying jobs, the more a country’s wealth increases.

Feminists work to end this. The “Rape is Rape” email campaign in 2010, launched by the Feminist Majority Foundation and Ms. Magazine, sent over 160,000 emails to the Federal Bureau of Investigation to change the definition of rape to include men and oral assault. This campaign forced the FBI to change its archaic language and acknowledge that men can be victims, too. Additionally, the #MeToo campaign, which was launched by feminist activist Tarana Burke, brought hundreds of rape and sexual assaults into the public eye and led to the prosecution of many infamous figures, including producer Harvey Weinstein.

Young women aged 15 to 24 account for 59% of illiterate people, according to United Nations International Emergency Children’s Fund. Developing countries still consistently practice the archaic and painful process of female circumcision, of which 200 million girls have been circumcised, according to WHO. in sub-Saharan Africa, many eastern Asian countries and many parts of the Middle East, almost four in 10 women are married before their 18th birthday, according to UNICEF, which has been proven to lead to an interruption or termination of schooling, early and frequent pregnancies and extreme poverty. This practice of child marriage and subsequent early pregnancies leads to higher infant mortality, higher mortality rates in childbirth and overpopulation.

This is a serious problem. Many human demographic population experts estimate that Earth is already in overshoot, meaning that we will soon run out of natural resources if population growth is not stabilized. It is clear that child marriage, which leads to poverty and a lack of schooling, is one of the largest contributors to this, since women with less education have less access to birth control and less career options, causing them to have more babies, according to a study done by Ajou University in Korea. Educating women can prevent this. For every additional year of schooling a girl receives, their wages increase by 10-20%, encouraging them to have fewer children and wait longer to start families, according to UN Women.  Additionally, as exhibited by the National Family Planning Program in Thailand, general education in school leads to increased education and usage of methods of contraception and birth control, further decreasing population growth. The education of women, which is the center of international feminism, can do so much more than what is on the surface.

Despite women of color being paid significantly less, women of color suffer even more inequalities than that. Rates of unemployment for black and Hispanic women were 13.3% and 11.3% respectively, compared to 7.2% of white women, according to the Center for American Progress. And though women of color represent 36.3% of the overall female population of the United States, they account for 53.2% of uninsured women, with Hispanic women having the highest population of unemployed, according to CAP. Additionally, women of color are underrepresented on college campuses, in the political spectrum and in the workplace.

Feminism, when it is intersectional and not white feminism, encourages diversity and attempts to close the gaps between white men and women and men and women of color. Even from the first wave of feminism, women like Sojourner Truth led the abolition movement, weaving it in with feminism in her famous “Ain’t I a Woman” speech, while others like author and feminist Ida B. Wells led anti-lynching campaigns all over the country and started the National Association for the Advancement of Colored People. Later, feminists like Dorothy Height and Eleanor Roosevelt were at the forefront of the civil rights movement, and racial equality has been closely tied with the intersectional feminist movement for centuries.

It’s important to remember that though these statistics are frightening, perhaps more frightening is the knowledge that behind the numbers are real women. Feminism is not about buzz cuts, unshaved armpits and dominating men; it’s about understanding there are women suffering every day from oppression, sexism and outright discrimination. You don’t have to be a woman to be a feminist; you just need to believe in the basic human right that all people should be equal.

As seen in Issue 5 here.