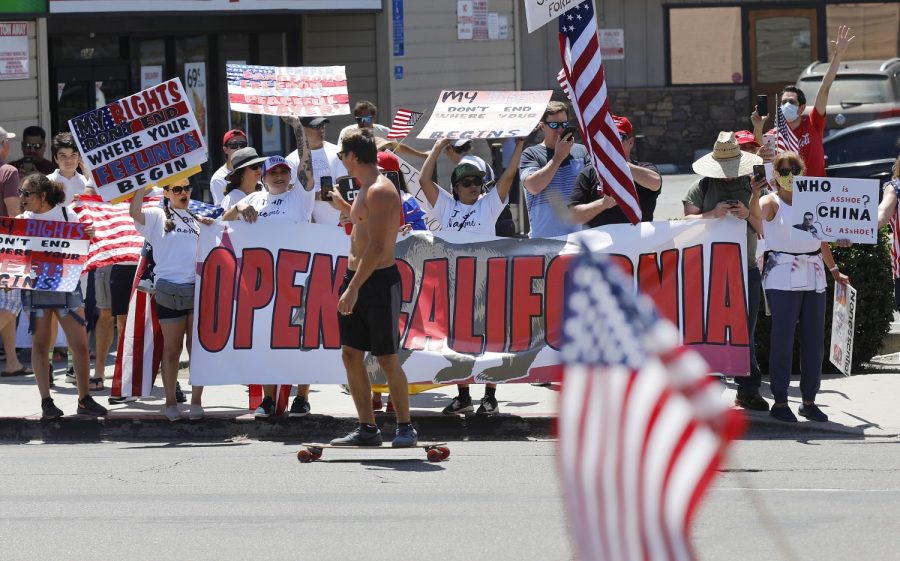 A skateboarder films protesters along Mission Blvd. in Pacific Beach during A Day of Liberty rally on Sunday, April 26, 2020. The protesters were against the government shutdown due to the coronavirus.

Anti-coronavirus lockdown protests have been going on in the United States for weeks. The people participating in the protests have claimed that the government is infringing on their civil liberties by demanding people stay “locked down” during the spike of the coronavirus, according to BBC News. Just last week, Monday, April 20 protesters gathered at the J.C. Nichols Plaza here in Kansas City to protest the city and state’s stay-at-home orders.

Peaceful protests are an American right that cannot be taken away even in the midst of a global pandemic. Protesting is not wrong, in fact, it is a right that Americans have exercised in the past that has been tied to huge victories such as the Civil Rights Movement and Women’s Suffrage. The first amendment in the U.S. Constitution guarantees all Americans the right to assemble in a peaceful manner. As long as coronavirus lockdown protesters are assembling in a nonviolent manner, nothing illegal is occurring. The danger that protesting poses are the breeding ground for more cases of coronavirus because of the close proximity of the protesters and the fact that the majority of protests have been occurring in cities, according to USA Today.

Protesting at a time when a pandemic is surging the states is ignorant and morally wrong because it is risking the lives of thousands of compromised Americans. Americans whose immune systems are compromised – elderly, those with predisposed medical conditions, those taking immunosuppressants, according to The New York Times – are the ones who are being threatened by protests. Protesting increases the risk that compromised Americans will be exposed to the virus and have potentially fatal results by trying to fight it off.

Protesting also increases the likelihood of the economy having a slower reopening according to USA Today. Protesting will result in an increase of coronavirus cases. These cases will result in extended “stay-at-home” orders which will cause non-essential businesses to be forced to keep their doors closed. Without non-essential businesses resuming operations, the economy will continue to suffer and have a slower reopening leaving many Americans in tough financial situations.

Protesting is not achieving what it has historically, the recognition of a wrong. Rather, these protests will go down in history as those of ignorant Americans more concerned about their enjoyment than the health and wellbeing of others. Historically, in times of war, Americans have come together in an effort to fight off the enemy. During World War II, people at home gave up food and clothing through rations in an effort to help the greater good. COVID-19 is the 21st century’s war. The war that is being fought in our very front yards serves as even more a time to come together as a nation and do what the government is asking. Staying home seems a lot easier than rationing food and clothing.

While the right to peacefully assemble and protest a decision the national and state governments have decided to proceed with is legal, in the situation the world is in now, it is not right. Being kind, caring, loving and aware of the people around should always be top priority in the minds of Americans. Protesting does the opposite – it puts those same people at risk for disease, suffering, and potentially death.

Advising others to comply with current orders and reminding people that the lockdowns are temporary is the best way to attempt to end the virus earlier rather than later. The fine line between ignorant protesting and exercising rights has been broken amidst the pandemic and it is being broadcasted on live T.V. for all to see.