Teenagers should reduce the time they spend on their devices in order to better their physical and mental health. 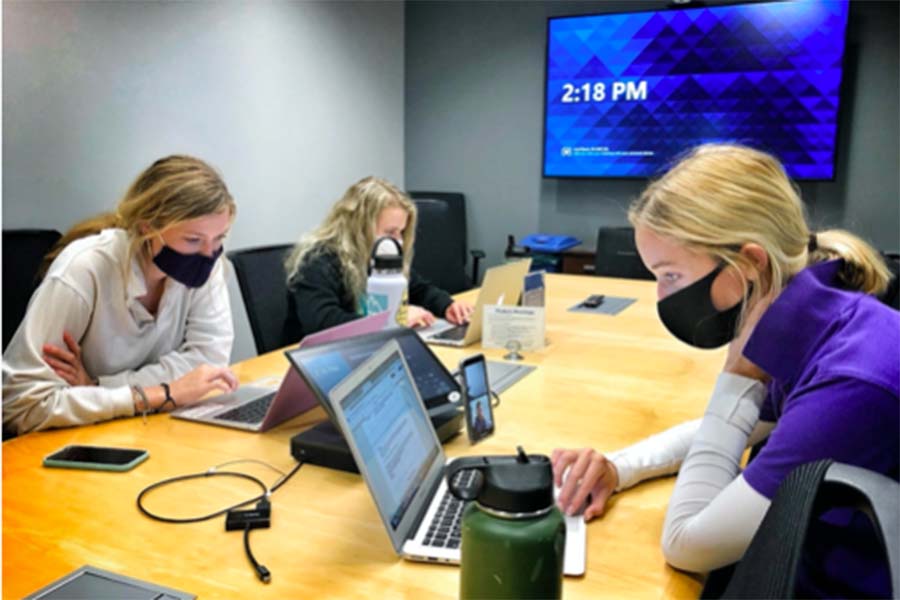 Seniors Mady Jenkins, Hannah McGraw and Violet Tumlin work on their projects for the Designing Real World Impacts class at the Burns & McDonnell headquarters on Sept. 2.

It’s an addiction almost every teenager has. Seven hours and 22 minutes per day spent scrolling through social media, staying in the loop with friends and enjoying endless sources of entertainment for hours on end. Teens are addicted to their phones. In order for teenagers to have the best health, both physically and mentally, they need to reduce the time they spend on their phones each day.

Teenagers need to have consistent limits on the time spent on their devices so that they don’t replace physical and social activity with social media, according to the American Academy of Pediatrics. Research from the AAP has shown that teenagers spend more time on their phones that they do on any other activity.

While technology and screens might be comforting and help you stay virtually connected, it can also impact your health. Swipe through and discover 6 ways to help you reduce your screen time and be more present 💡 Let us know in the comments below which strategy works best for you 👇🏼👇🏼👇🏼 #fiveminutejournal #inspirationalwords #motivationalwords #mindfulliving #gratitudejournal #gratitudeattitude #gratitudepractice #mindsetshift #bepresentinthemoment #screentime

Reducing the amount of time spent on their phone allows a teenager to have more time for more physical activity. Whether it’s a simple workout at home or a gym membership, it’s common knowledge that all people need a certain level of physical activity in order to keep a healthy and suitable lifestyle. On average, teens need to be getting about 60 minutes of physical activity per day, according to the Centers for Disease Control and Prevention. Taking time away from the screen enables more time that can be used to get your body up and moving. Teens need to reduce their screen time so that they are able to have this necessary time in their everyday lives. Not only is this necessary for one’s physical health, but also one’s mental health. Exercise promotes mental health because it releases endorphins that improve one’s mood, reduce stress and help with recovery from mental health issues, according to healthdirect.gov.

Reducing screen time has a substantial impact on one’s mental health. Teens who spend more than three hours a day on social media apps were 60% more likely to have thoughts leading to depression, anxiety and other mental health risks, according to a study done by JAMA Psychiatry. Spending more time viewing another person’s life through a social media app rather than in person can lead to more unhappiness. Teens constantly give and receive judgment based on their social media profiles. If teens reduced their screen time, which would overall reduce their time spent on social media, they would likely feel less judgment and would allow a teen to have more time to spend on other activities that they enjoy, ultimately boosting their happiness.

Teens are also likely to get a much better night’s sleep when they do not use their phones as much throughout the day, especially more towards the time they go to sleep. Using electronics emits blue light, which suppresses melatonin and ultimately makes it more difficult to fall asleep, according to the National Sleep Foundation. Teens will not only get more sleep if they spend less time on their phones, but they also will have a better sleep quality. Sleep is extremely important especially for growing teenagers, so they should stop using their electronics closer to the time they go to bed in order to reap the most benefits from sleep.

Communication through electronics also has detrimental effects on a teen’s level of social interaction. While messaging through the phone may be much more convenient and less confrontational, primarily communicating in person can lead to less social anxiety and lower levels of stress in social situations. Feeling socially isolated is a large risk factor to a teen’s mental health, as well as it takes away a vital skill that they will need in their future. In-person activities and interactions promote mental health, so switching to interactions that aren’t just over the phone is extremely beneficial.

At a younger age many teens utilized educational media. However, as they get older, teens focus almost solely on entertainment media rather than educational media. Many teens spend much more time on media on their electronics than they do doing homework or studying for school. Leaving more time for schoolwork would have the ability to greatly increase a student’s educational engagement and possibly their grades overall.

Teens should only be using their phones for about two to three hours per day, excluding time spent on devices for school-related work. Three hours is plenty of time for teens to enjoy the benefits of their electronics; technology provides us with ways to interact with friends, take a moment to destress from the long day, and keep in touch with the current news and trends. The time teens spend on their phone should be spent in a way that does not take the place of sleep, exercise and social interaction. Clearly, technology is here to stay. Teens just need to make sure that they aren’t letting their screens control their lives.