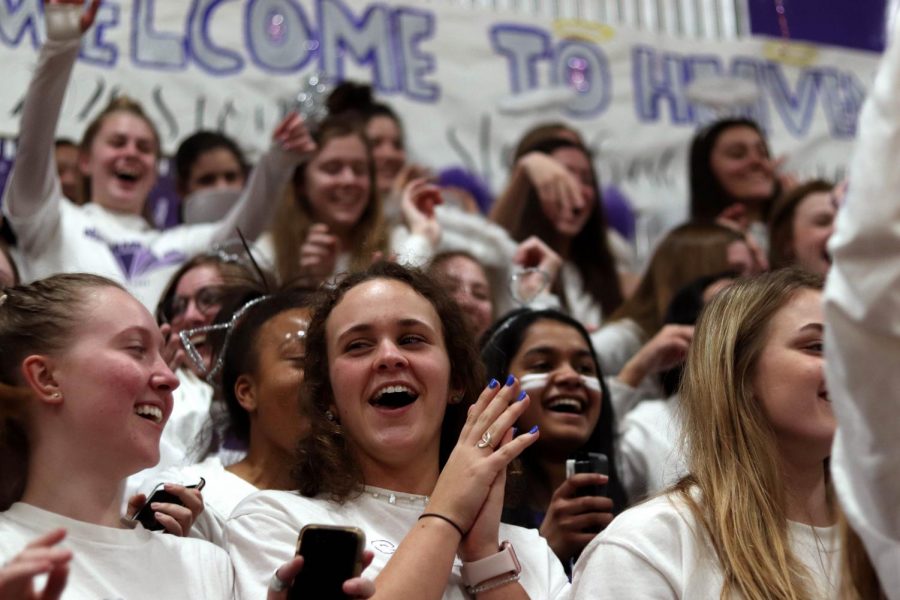 Juniors Sophie Henkle and Caroline Giocondo laugh as they cheer on the varsity basketball team during their game against St. Teresa's Academy Feb. 27.

The basketball team defeated St. Teresa’s Academy 53-42 in the Irish Cup after a sequence of game day festivities Feb. 27.

The day consisted of a pep rally, tailgate and senior night celebrations leading up to the Irish Cup, an annual rivalry game held between the two schools.

The game was physical, with ten fouls per team at the half. The second quarter ended with STA in the lead 27-25 and with freshman Makayla Hebert and STA junior Madeline Gentry wrestling for possession. The crowd chanted “that’s our freshman.”

“We got into foul trouble with one of our players, Shannon,” head coach Chad Lynn said. “But a lot of the girls who don’t usually come in on varsity came in and held it down.”

The second half was fast-paced as the teams traded points. Scores remained close until the last five minutes of quarter four when the team made multiple successful fast breaks resulting. The angels began celebrating with a victorious rendition of the school song, but were cut short as junior Shannon Karlin shot her final free throws.

“I feel so pumped,” Karlin said. “This is the biggest game of the year and I’m so glad we had a big crowd here. I’m going to miss my seniors so much. I teared up a little bit before the game.

Senior night preceded the varsity game and featured dance, cheer and basketball seniors. Underclassmen presented their team’s seniors with flowers and gifts as their parents escorted them across the court. This was senior Rose Orrick’s final rival game after taking a two-year hiatus from basketball.

“Winning was definitely my favorite high school memory and one I will never forget,” Orrick said. “I decided to play this year so I could play against STA and win. And we did it twice! So I couldn’t have been happier and more proud with our season and the team.”

“I have been dancing for 14 years of my life, so to see it come to an end is sort of sad,” Townsend said. “I get to see it come full circle. It’s really cool to celebrate the work we put in with the people I’ve danced with for the past four years.”

Current and prospective students, grades fourth through eighth were invited to the game and a pre-game tailgate. Pizza, face paint and pipe-cleaner halos were up for grabs for the 106 visiting students. Horizon Academy eighth-grader Morgan Lewis was among those attending.

“Sion girls in the stands were very energetic,” Lewis said. “It was a very loud crowd that seemed like they were having fun no matter what.”

The theme for the game was “welcome to heaven,” according to scream team leader senior Brie Bowes. Bleachers held a record amount of supporters, including current and prospective students decked out in halos and angel wings. Spirits were high following the upbeat pep rally held that afternoon, which featured relay races and dance and cheer performances, according to Bowes.

“The spirit was overwhelming,” Bowes said. “Looking up and seeing everyone scream their head off made my heart overflow. It feels great to be three and zero.”